Who is Kyle Busch and why does he keep following me?

This is an ongoing story, so keep checking back until it's a full article. Note that this was written at the height of Kyle Busch's amazing season...

I find it ironic that when people (who "know" me) ask how I could possibly be into NASCAR, and I use the analogy of Dead Tour, or just say "Jerry died", my response is often met with a blank look of "whuh?".

One of my favorite Grateful Dead tapes is the infamous Watkins Glen soundcheck from '73. My copy, with a lovingly handwritten set list on a cream colored, Calvin and Hobbes cardstock cassette cover, was played until it was almost inaudible. It made the words "Watkins Glen" cool before I had ever even seen a NASCAR race.

Now that I live about 15 miles from Watkins Glen, I've had a bit more education and a lot more of an appreciation for stock car racing, or more specifically NASCAR.
And the similarity to Dead Tour is amazing. 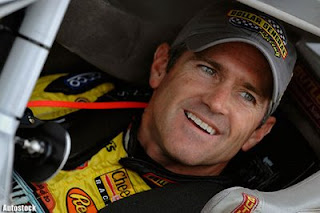 Sure I have a huge crush on Bobby Labonte... like preteen hippie chicks didn't pine for Bob Weir.

Okay, here are some of my observations:


#1: The NASCAR season is like Spring, Summer, and Fall tours combined.... and the finale of the Race for the Chase at Miami-Homestead is a harder ticket to score than a pass to the New Year's show in California!

The first races of the season reveal the drivers to watch much like Spring tour unveiled new (and old, dusted off songs) as well as Jerry's health. Sponsors fine tune their cars' color schemes just like guest keyboardists are scheduled in advance. Basically, there's a specific time line that evokes the same excitement...and disappointments.

#2: You remember the feeling when Phil dropped the "bomb", or when Jerry soloed to the stars, and the music impaled you with joy? Sit trackside as 43 cars swarm past you going 160 mph. This isn't like the neighbor without a muffler, or the pizza delivery boy with the new Bose speakers... this is a guttural, rhythmic pounding and it evokes goosebumps. If it were music, it would be the Who (with Keith Moon).

#3: Roadies, Sound Techs and Pit Crews. Not much would get done on the track or on the stage without them. They are the blood, sweat, and (maybe not so many) tears. They get the music playing and the drivers on course, the instruments tuned and the tires inflated. Listen to some driver/crew communication and you'll here more "good job, buddy's" than at a dog training school.

#4: What will they open up with? What will they close the first set with? What about second set? Will we get a St. Stephen? What about the encore??? These questions buzz around the Grateful Dead stadium parking lot much like the drivers' qualifying runs and resulting pole positions invite statistically hopeful conversations about driving strategy throughout tailgating groups at the track.

Are you seeing any similarities here?

There are more... I'm just tired... and I gotta go catch highlights of an amazing race at Dover!
Share |

Great blog. I'm James. A friend of Dave Makar. I have 2 extra tickets for sale for the Charlotte race this saturday night if your interested.....

Oh you're killing me!!! I'm still recovering from just watching Talladega! OMG - the big one with 14 laps to go AND the "who the heck won?" finish!

Thanks for the kudos btw - I've got to check out your blog!

As for Charlotte tickets - oh, if I could just clone myself - just the part that needs to keep her job - I would do it in a heartbeat! I've heard that Bobby will be driving the pink Susan G. Komen car.