The Adventures of Skipper and Slouch 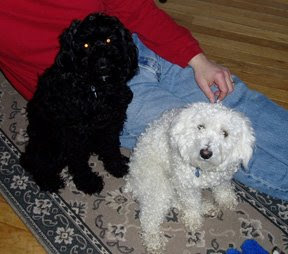 Oliver (white) and Dodger (black) are our "rescue dogs", although we didn't really rescue them... we won them. When over 70 people apply to the SPCA to adopt two poodles (well, one poodle, one spoodle) that have been together since they were born (to a breeder), it's more like a lottery jackpot than a rescue. They were willingly given up by a family that didn't want them anymore. They came to us as Tony and JJ and we immediately renamed them. We don't know the details of their first two years of life, but we've had them for about four years now and they never cease to crack us up! The first photo photo was taken the day we brought them home... I call it "who are you and will you love us?" 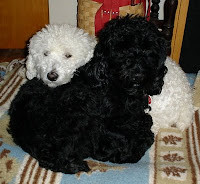 They are two peas in a pod... one dog in two bodies.
Yin and Yang. They have two totally different personalities, but they are inseparable. They have to be together at all times, or at least kept in each other's sight. Even at the vet, they have to be on the table together or they panic.

I call them Skipper (Oliver) and Slouch (Dodger). Or Comet and Cupid, Piglet and Eyeore - whatever happens to come to mind watching them interact with each other. Whether they're curled up together in a black and white, furry ball or chasing each other around the picnic table, they are completely in tune to each other's movements, no matter how subtle. They are typical twins, but obviously not identical in looks or in personality. 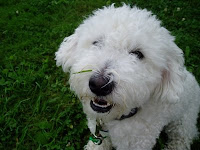 Oliver is extremely happy-go-lucky and not a good listener. Nothing fazes him. Not even skunks... and THAT was a horrible night! Actually a horrible week as the scent lingered in my clothes, glasses, and car keys for a long time! I used to kinda like the smell of skunk... now it makes me nauseous as it brings back the memory of vomiting all over the house.
He's definitely the alpha dog. And he knows it! He's like the kid in class whose name has to be repeated over and over by the teacher. 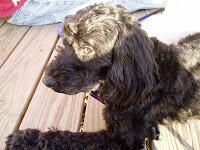 Dodger, on the other hand, is a bit neurotic. We think he had a pretty damaging experience in his puppy years. He shakes a lot and is extremely timid. He's the lover... he needs constant reassurance that he is indeed a "good dog".

I call him "Slouch" because his hind legs are too long for his body, so he walks like an old man with hemorrhoids, all hunched over... compared to Oliver's "Skipper" walk, where his back legs actually trip up his front legs. Together, they look like Piglet and Eyeore walking into a Milne sunset. (I know it's Pooh an Piglet, but Dodger is much more like Eyeore.) 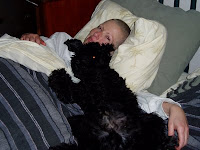 Best medicine: when I had cancer, Dodger never left my side.
The only picture of me going through chemo is this one, with Dodger splayed out on top of me... protecting me, loving me, and keeping me safe and secure. Although he looks like he's doing a "Hey y'all", he was my best medicine. For as little love he may have (or not) received as a puppy, he sure gives a lot of affection. I treasure this photo because it reminds me of how much I (we) have all been through in the last three years, and how much I love my boys. All of them! 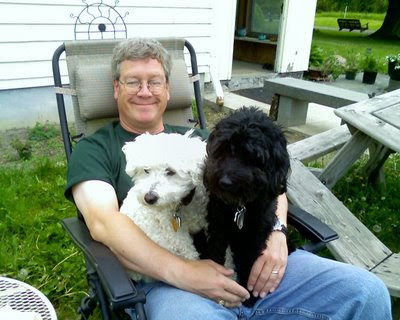 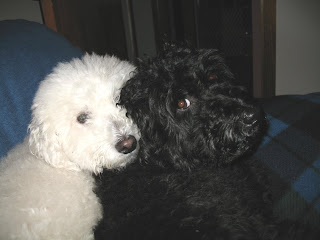 Oliver and Dodger in their usual state of togetherness.