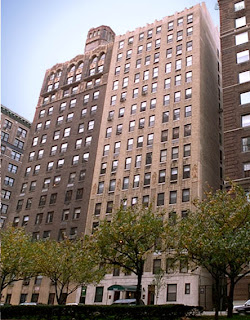 This is where I grew up.

That would basically be the whole tenth floor as shown, as 10-B was the whole back half of the building - which I actually would have preferred as I would have been able to survey the P.S. 6 schoolyard to see if anyone was "hanging out". (Before puberty, "hanging out" meant playing stick ball... after puberty, "hanging out" meant "pining for John Denoia"). As it was, I could lean out one of the alley windows (see that sliver?) and listen for the sound of dribbling basketballs or well hit softballs. I got really good at recognizing particularly sexy voices and the spurting fizz of beer can pop tops... ummm, as a teenager I mean.

I experienced many "firsts" in that schoolyard. It defines me in inexplicable ways. Like a sorority sister's collection of yearbooks or a chef's recipe box of sauce stained index cards.

My world inside that schoolyard was the dynamic opposite as the one that moved below my bedroom windows, which are the two windows all the way to the left. I think that's my old air conditioner, which would now be my step-mother's, but I wouldn't really know because I haven't been welcomed into that apartment since my dad passed away a few years ago (wow, this could be a long one...).

The doormen, the shopping bags, the private school cliques fresh off their buses, the yellow blur of taxi cabs. I would much rather be blowing up Scooby Doo thermoses with M-80's on Halloween or waiting for John Denoia to pull up on his ten-speed and flash a grin to make me stutter. 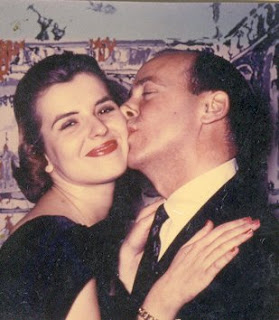 Once upon a time...
My parents moved into apartment 10-A in the late 50's (maybe early 60's) with a newborn baby (my sister) and ready for "happily ever after". My father was securely and passionately attached to the family business - his uncle, my great uncle, was Harry Winston (can I say that without getting sued?) - and my mother, for the 15 short years I knew her at least, was a perfect lady.

"Happily ever after" never really came for them and this blog is very much a result of that derailment, but it is also and exploration into how I went from Park Avenue to Podunk Road.

They (we) moved in 1962. I actually have some vague memories of our first apartment at 541 Pelham Road in New Rochelle.

We could get together to write an entry just on how many times I/we switched rooms ...

Hey, maybe John Denoia will vanity surf and find his name and get in touch with you here!

My sister Lisa will be my harmony - kinda like when we were really young, and she played the piano to, and we sang harmony to, The Monkees' "When Love Comes Knocking at Your Door" ...

after not knowing my cousins this blog is quite interesting and there is much to read- in the very early 60's I worked almost right across from Winston's at the Paramount Pictures building for Meshulem Riklis-how many times I had the inner urge to pop over there - but alas it wasn't the kind of place to pop over into..
-Alan